For further information or to arrange a visit, please contact one of the Curators. 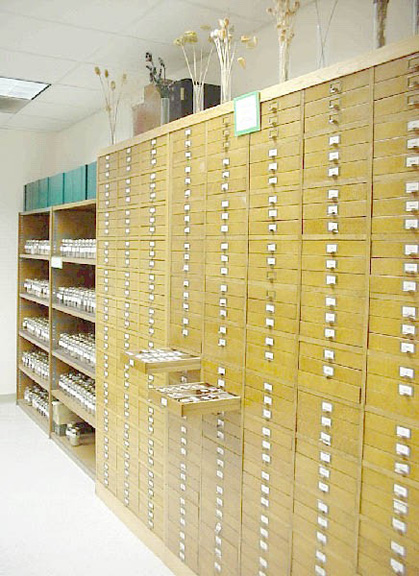 The CDA Seed and Fruit Collection (SFC) is the second largest collection of its kind in North America. Originally developed with representative species found in California agricultural situations, the collection has grown to include species from all over the world. As of August 2007, the CDA SFC contains approximately 40,000 specimens. Major contributions to the CDA SFC were made by the following organizations:

Recently, the Seed Laboratory began a long-term project to database the entire CDA SFC and make the data available on the Web.

The Seed Laboratory maintains a reference library devoted to seed science and seed technology. A searchable database containing over 11,000 entries of books, scientific journals, and literature files is available for use by staff and visitors to the laboratory.

Books, scientific journals and literature files are available for use by all CDFA staff and visiting scientists. The materials are not available for loan, although on-site photocopying is permitted.

Among the numerous reference materials, we are fortunate to have complete sets of the following publications:

Published by the Association of Official Seed Analysts (AOSA):

Published by the Society of Commercial Seed Technologists (SCST):

The Seed Laboratory serves as the archive and database manager for the AOSA/SCST Referee-Research Projects Reports. Coverage includes reports from 1971 to present. Requests for copies of reports should be directed to the Collection Manager.

Specimens from the 600+ species in the Bulk Seed Collection are available upon request, free of charge, for the purpose of seed herbarium enhancement. These specimens are non-viable. To request specimens, please enclose coin envelopes or specimen vials, labeled with the family AND scientific names. Please limit requests to no more than 30 species at one time.

The Bulk Seed Collection is also available for visiting scientists to gather their own specimens. To speed up the process, we recommend that you pre-label your specimen containers before coming to the laboratory. The number of specimens you may acquire per visit is not limited. The collection is open Monday – Friday, 9 am to 4pm.

To arrange a visit for this purpose contact Dr. Robert Price.

To request specimens by mail, fill out the first page of the request form . Note, only the first page should be mailed with the enclosed coin envelopes or specimen vials. The remaining pages have the list of taxa available, for your records.