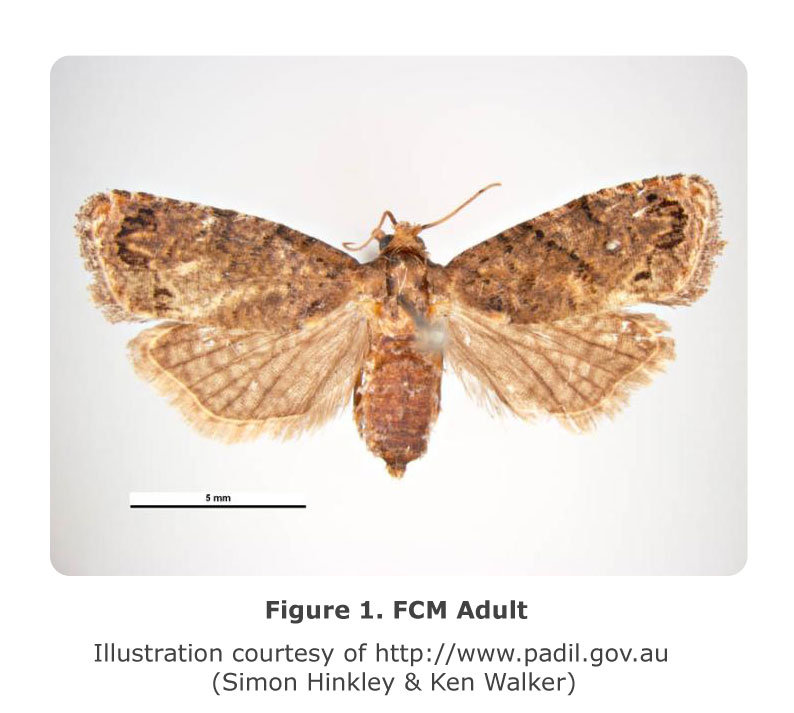 Adults are small, brownish-gray, nocturnal moths with an average wingspan of 16 mm (2/3"). (Fig. 1 ) Eggs are whitish, flat and oval in outline. Young caterpillars are whitish and spotted, while mature ones are pinkish with red above and 15 mm in length. Pupation occurs in the soil or in bark crevasses within a cocoon made of silk and debris particles.

This moth is multivoltine with up to six generations a year in South Africa. Its generation time is 45-100 days, and the larvae are internal feeders. Females lay 100-250 individual eggs during their lifetime on fruit or foliage. Eggs are usually laid singly on the surface of fruit. Newly emerged caterpillars may wander on the surface of the fruit before entering. Caterpillars bore into fruit, thereby rendering it undesirable for consumption and allowing for the introduction and growth of bacteria and other microorganisms. Infested fruit generally drops before harvest; however, infestations that occur near fruit harvest may not be detected and infested fruit may be subsequently packaged for export. When emerging on cotton bolls, caterpillars first mine the walls and later move into the cavity and feed on seeds. Mature caterpillars leave the fruit and spin cocoons in the soil or in bark crevasses.

There is a pheromone lure for the males, namely 50:50 mixture of (Z): (E)-8-dodecenyl acetate. The lure lasts 8 weeks. Traps should be put in host trees at ca. 1.5 m in height or higher, and on stakes in row crops.

Based on its status as a pest in Africa, establishment of FCM in California and/or in other parts of the United States could result in significant economic losses. FCM would likely be a significant production and quarantine issue for numerous agricultural commodities. In California alone, the annual combined gross value of the top ten agricultural commodities which would be directly impacted by this pest is over $7.1 billion, which amounts to 22% of the total agricultural value for the State (USDA NASS 2007).

Establishment of this moth could cause direct environmental damage via increased pesticide use statewide by commercial and residential growers and via adverse feeding impacts on native plants. Populations of threatened and endangered plant species could be severely threatened or extirpated should this moth adapt to feeding on them.

The most significant route of artificial spread is likely to be on fresh produce. Other methods of spread are on plants sold through nurseries and destined for commercial, ornamental and garden plantings; green waste; and conveyances.