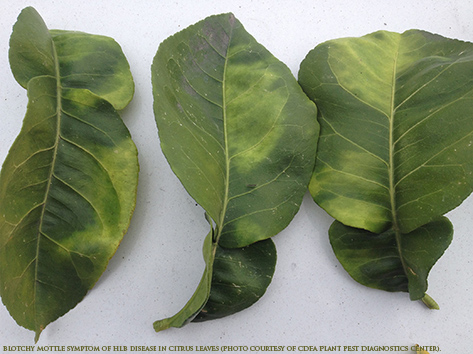 The plant disease known as Huanglongbing (HLB) or citrus greening is caused by a phloem-restricted bacterium which is vectored by the Asian citrus psyllid (ACP). The scientific name of the bacterium is Candidatus Liberibacter asiaticus (CLas). The “Candidatus” portion of the name indicates that this organism has not been cultured and is therefore characterized on the basis of DNA properties. Two other related forms of the bacterium are known—one of African origin and one of South American origin, both of which can be also be vectored by ACP. Candidatus Liberibacter is differentiated from other citrus-infecting bacteria by the presence of a cell wall and its location in the phloem tissue of the host’s vascular system.

HLB can be difficult to detect since the host may remain symptomless for months to years before exhibiting symptoms of infection. An early symptom of the disease is blotchy, yellow, asymmetrical mottling of the leaves. This leaf symptom is different from nutritional disorders which are more often vein-delimited and tend to be more symmetrical. The yellow mottling of the foliage gives rise to the development of yellow shoots on single random branches (nutritional disorders generally show more uniform symptom distribution in trees). Progressive yellowing of greater portions of the canopy follows. HLB bacteria do not cause foliar wilting such as that observed in trees infected by other citrus pathogens. More advanced symptoms include twig dieback, stunting, and decline in the tree’s health to the point where the tree bears only a few, small, deformed (lop-sided) fruits that are poorly colored and bitter tasting. Tree mortality usually occurs several months to years after infection.

The HLB pathogen is moved from tree to tree by ACP feeding on an infected tree then moving to and feeding on a non-infected tree. After gaining entrance to the tree’s vascular system, the pathogen takes up residence in the phloem tissue. As the bacterium multiplies and moves within the tree’s vascular system, it chokes off the supply of nutrients moving throughout the plant, weakening the plant and eventually killing it. While insect vectoring of the HLB pathogen is the primary means of disease spread, the movement of infected host plant material, either in the form of nursery stock or of plant tissue for grafts and buds, can also contribute significantly to the rapid and potentially long-distance spread of the disease.

Hosts for Candidatus Liberibacter asiaticus, the bacterial pathogen that causes HLB, include nearly all citrus species and hybrids, as well as numerous citrus relatives in the Family Rutaceae. A comprehensive host list for the HLB pathogen can be found listed in the California Department of Food and Agriculture Huanglongbing Disease State Interior Quarantine #3439 (see Section C.1.) at:

Detection of the disease is extremely difficult by symptoms alone. Diagnostic laboratories utilize molecular assays to detect bacterial DNA in plant hosts and in insect vectors to confirm the presence and identity of the pathogen. However, diagnostics are difficult when there are no symptoms because the pathogen population in the tree may be too low to detect. Therefore, plant samples are generally collected from symptomatic foliage. Veins and petioles are cut from the leaves and processed in the laboratory to maximize the chance of detecting the bacteria.

HLB has been described as the most devastating disease of citrus in the world. HLB affects almost all citrus cultivars and causes substantial economic and environmental losses to the citrus industry as well as residential back-yard citrus by shortening the life of trees and making fruit and juice inedible. In a recent study in Florida, the presence of HLB increased citrus production costs by 40 percent (Irey et al. 2008). It is estimated that over the last five years in Florida, HLB has caused the loss of over 6,600 jobs, over $1.3 billion in lost revenue to the citrus industry, and the loss of over $3.6 billion in total economic activity (Hodges and Spreen 2012).

There are currently no curative methods to control HLB and there are no chemical controls that specifically target the bacterium. Thus, comprehensive control measures for HLB focus largely on prevention of infection by eradicating infected plants, controlling the vector, ACP, and the production and planting of HLB-free trees.