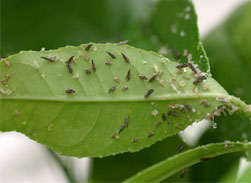 The Asian citrus psyllid (ACP) is 3 to 4 millimeters long with a light brown head and brown mottled body. The wings are broadest in the apical half, mottled, and with a dark brown band extending around the periphery of the outer half of the wing. The insect is covered with a whitish waxy secretion, making it appear dusty. Nymphs are generally yellowish orange in color, with large filaments confined to an apical plate of the abdomen. The eggs are approximately 0.3 millimeters long, elongated, and almond-shaped. Fresh eggs are pale in color, then, turn yellow, and finally orange at the time of hatching. Eggs are laid on plant tissue with the long axis vertical to the surface of the plant.

ACP was first found in the United States in Palm Beach County, Florida, in June 1998 in backyard plantings of orange jasmine. By 2001, it had spread to 31 counties in Florida, with much of the spread due to movement of infested nursery plants. In the spring of 2001, ACP was accidentally introduced into the Rio Grande Valley, Texas on a potted citrus tree moved from Florida. It was subsequently found in Hawaii in 2006, in Alabama, Georgia, Louisiana, Mississippi, and South Carolina in 2008.

Eggs are laid on tips of growing shoots on and between unfurling leaves of citrus plants. Females lay 300 to 800 eggs during their lifetime. Nymphs pass through five instars. The total life cycle requires from 15 to 47 days, depending on environmental factors such as temperature and season. The adults may live for more than a month. There is no diapause, but populations are typically low in the winter or during dry periods. There are 9 to 10 generations a year, with up to 16 observed under observation in field cages.

Hosts for ACP include nearly all citrus species and hybrids, as well as numerous citrus relatives in the Family Rutaceae. A comprehensive host list for the ACP can be found here:

The ACP feeds mainly on Citrus spp., at least two species of Murraya and several other genera all in the family of Rutaceae. Damage from the psyllids occurs in two ways: the first by drawing out of large amounts of sap from the plant as they feed and, secondly, ACP produce copious amounts of honeydew. The honeydew then coats the leaves of the tree, encouraging sooty mold to grow which blocks sunlight to the leaves. However, the most serious damage caused by ACP is its ability to effectively vector three phloem-inhabiting bacteria in the genus Candidatus Liberibacter, the most widespread being Candidatus Liberibacter asiaticus. These bacteria cause a disease known as Huanglongbing (HLB), or citrus greening. In the past, these bacteria have been extremely difficult to detect and characterize. In recent years, however, DNA probes, electron microscopy, and enzyme-linked immunosorbent assay tests have been developed that have improved detection. Symptoms of HLB include yellow shoots with mottling and chlorosis of the leaves. The juice of the infected fruit has a rancid taste. Fruit does not color properly, hence the term “greening” is sometimes used in reference to the disease. HLB is the most devastating disease of citrus in the world. Once infected, there is no cure for the disease and infected trees will decline and die over time. The once flourishing citrus industry in India is slowly being wiped out by dieback. This dieback has multiple causes, but the major reason is due to HLB. Additionally, the Florida Department of Citrus recently reported that citrus production in Florida could drop over 80 percent by 2026. California is being proactive and applying lessons learned from other states and nations to quell this pest and disease.