Notifications and Maps (None at this time.)

No quarantines at this time

The gypsy moth (GM) is a pest that voraciously feeds on the leaves of trees and shrubs, threatening residential settings, forests and agricultural tree crops. 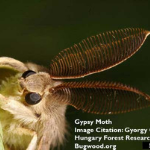 This website has been designed to answer questions about this pest. The gypsy moth is originally from Europe and Asia. It was brought to the U.S. for breeding experiments in Massachusetts in the 1860's and accidentally escaped.

It has since moved steadily southward and westward,

and now occupies the northeastern U.S. from Maine to Virginia and westward to Wisconsin. Gypsy moth caterpillars feed on hundreds of kinds of plants and are capable of defoliating trees at an alarming rate. A single gypsy moth caterpillar can eat up to one square foot of leaves per day. In the northeastern United States, millions of these caterpillars emerge each spring and devour large swaths of forest and foliage. When trees are repeatedly defoliated, they are rendered more susceptible to other pests and diseases, potentially leading to tree death and an increased potential for fire and erosion. In addition, the hairs on caterpillars are known to cause skin irritations and allergies for some people. 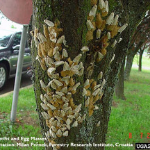 Young caterpillars feed primarily on oaks, aspen, birch, willows and alder, and older caterpillars feed on a broader range of trees including cedar, pine, spruce and fir. Common California species such as manzanita, western hemlock, Douglas fir and live oak are also prone to damage by this pest. 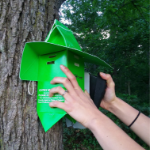 The primary detection method for this invasive pest is through the use of pheromone traps which strongly attract the male moths, trapping them in a glue material. The detection of moths in traps results in the placement of additional traps and/or egg mass survey around the find locations. Based on the results of these additional survey efforts, eradicative measures may be undertaken if the evidence indicates that a breeding population is present. Moth finds are generally the result of persons transporting infested articles when moving to California from infested areas in the northeastern United States or from other countries in Europe and Asia. Outdoor articles such as trailers, boats, lawn items, dog houses, etc. become infested when female moths lay egg masses or caterpillars construct cocoons on them.
The strain of gypsy moth established in the U.S. is commonly called the European gypsy moth (EGM). This is to distinguish it from a strain that exists in Asia, called the Asian gypsy moth (AGM). The main difference between the two strains is that females of the EGM can not fly, so its dispersal ability is limited to larval movement, whereas AGM females can fly several miles. In addition, the AGM tends to prefer conifers such as pine and spruce as larval hosts more so than EGM. The AGM has been found entering the U.S. on shipping containers and ships, but has not become established due to early detection and effective eradicative efforts.
CDFA, USDA, and County Agricultural Commissioners have educational posters and pamphlets on GM.

How We Can Stop Gypsy Moth

Contact the CDFA Toll-Free Pest Hotline (1-800-491-1899 ) to report suspicious insects or disease symptoms on your property. Help to protect California from invading pests and diseases.

Home The Battle Against Invasive Pests and Diseases